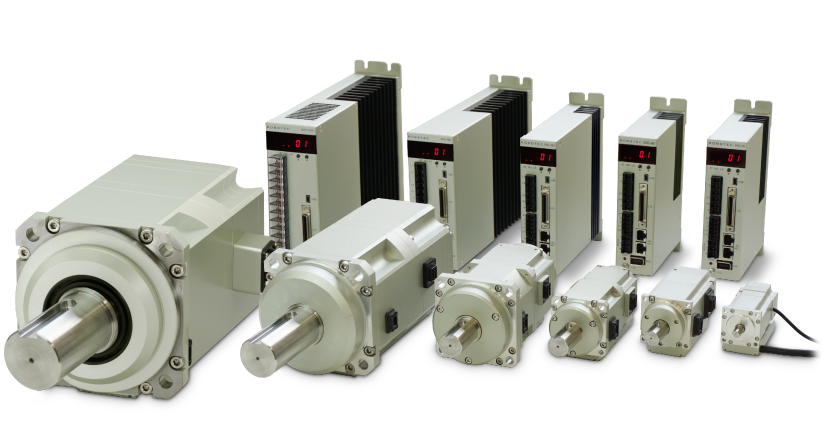 UNISERVO is the first actuator with motion control & built-in torque control function.
Feedback control is performed based on measured torque to achieve desired value.
Adopting a reduction gear, it is overwhelmingly smaller & lighter than direct drive motor (DDM) normally used for torque control.
In addition, the torque resolution reaches 1/10000, even large torques can be controlled delicately.
The response speed of the torque sensor is 3kHz, the sampling speed is 20kHz.
Since the moment of inertia of the torque generation mechanism is in the
torque feedback loop, it can be made extremely small along with feedback control.

What can be done by measuring the output torque?

Toqrque limit
Torque output level can be controlled so that it does not go above the preset limit. ⇒ Prevent to get caught in a machine
Zero torque control
By controlling the output toque to be zero (or nearly-equal to zero), the output shaft can be easily rotated by an operator. ⇒ Direct teaching
Compliance control
Spring motion can be simulated. ⇒ Characteristics similar to that of humans when applying force can be obtained.

Robots and operators have been separated by safety fences as robots cannot detect when their arms hit objects.
▼
Robots can be safer for humans if they can detect force and torque caused by human interaction. The efficiency of an operation can be greatly improved, and space can be saved as lot as safety fences can be removed so that humans and robots can work together.

Normally, power of motors used in care devices must be limited for safety, and thus, the response time is extremely slow.
▼
If the output torque can be precisely controlled, motor with larger power can be used, and the response time can be improved a lot.

The rotation angle of two motors are synchronized, and the motion is controlled that torques are balanced.
The ratio of torques can be changed as well. 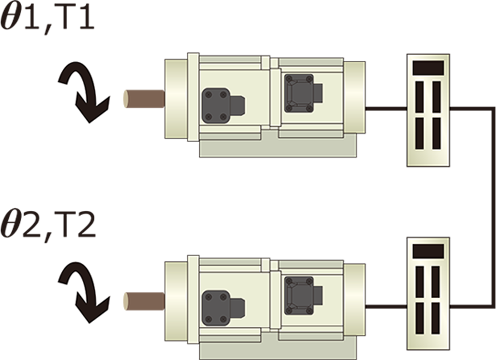 UNISERVO is equipped with safety functions for safeguard.
When following conditions are met, the servo is turned OFF, and UNISERVO stops operating.

Introducing gearless direct drive motor SVDM from UNISERVO series.
Torque feedback can be done with UNISERVO, which was a bottleneck for applications in high rotational speed.

Compared to normal UNISERVO, SVDM does not have a reduction gear. Therefore it is possible to measure torque directly and perform feedback.
In addition, higher rigidity makes it more responsive.

When you need high revolutions with UNISERVO

Although UNISERVO can control torque, there were cases where the maximum rotational speed became bottleneck in tension control.
The new lineup of UNISERVO direct drive enables feedback control of tension. In general, when controlling tension as shown in the illustration below, it is necessary to first provide a separate setup for tension measurement. UNISERVO direct drive has a very simple structure because the motor itself detects torque and provides feedback.

Easy control of UNISERVO with EC30! It is easier to make test system.
Waveform display, useful judgment functions & data is recordable!
The video above is an example of screw test. You can observe displayed waveform & hold points.

Control of UNISERVO can be set differently for each work. Changes are possible through touch panel.

Judgment can be done on each Work No. It is possible with various hold functions & waveform comparison.

EC70 allows complex control by branching out the sequence based on conditions!
Connecting the sequences, continuous tests under different conditions can be performed without PLC.


The display mode can be shown differently according to the application. 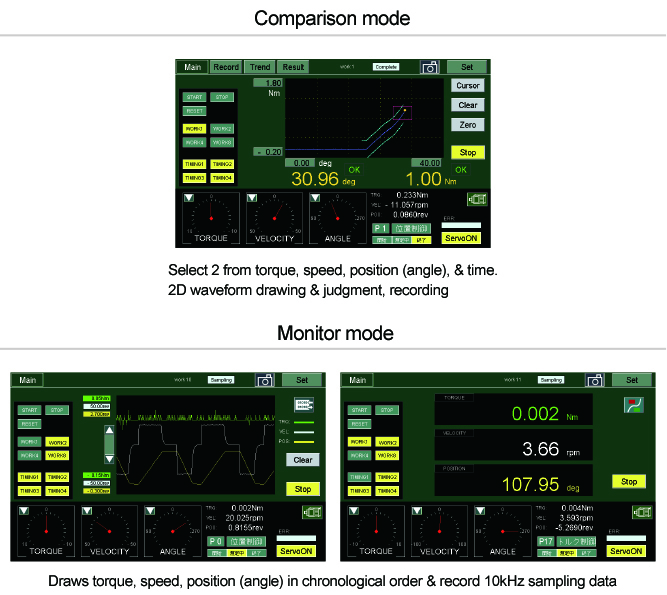 Torque control and speed control can be step control. 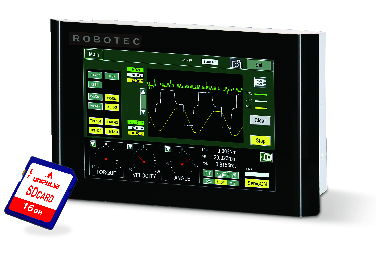 Spec. of the actuator

Spec. of the controller

Spec. of the actuator part of the UNISERVO (Direct drive type)

Spec. of the actuator part of the UNISERVO (with brake)

Spec. of the actuator part of the UNISERVO (with brake)

Spec. of the controller part of the UNISERVO (Field network type)

PC and the controller for UNISERVO can be connected with a communication cable.
Using terminal software, setting parameters can be read and overwritten via USB. 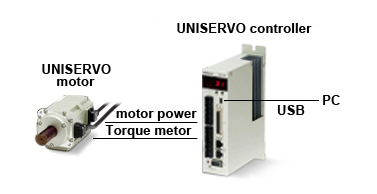